Notes from the Director's Desk 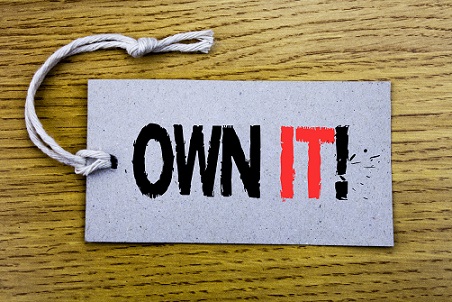 If you said or did it, you gotta own it. No excuses, no rationalizations, no blaming someone else.

Recently, one of my grandkids (in another community) was barred from competing in a regional sports event. He was heartbroken – as were his parents and all his grandparents. He loves his sport and works hard at it but he’d been having trouble with chemistry. He handed in all his homework, his parents had gotten him a tutor, he’d brought his grade up by 20% – but at the last minute, he failed a chemistry test and was knocked out of going to a regional meet with a shot at state.

There are all sorts of excuses, rationalizations and blaming that could have happened. But the kid (and his parents) owned his part in it by admitting he should have figured out the periodic table formulas they were working on. He should have studied harder. Yes, he was hurt. Yes, the school team missed his participation. Yes, we were all upset. But, as his (biased) grandmother, I am just so darned proud of him. He took it like a trooper. He did the right thing. He didn’t complain, blame, rationalize or make excuses. I think he’s a stronger kiddo for the experience. (And, hopefully he’ll have at least a B in Chemistry when the semester is over.)

I can only wish that owning our actions and our words were always the case – everywhere and in every situation. It isn’t. Here in the Valley, though, we get it right most of the time. And, I can tell you that in their reports, when we ask our nonprofits to tell us what didn’t work and what they learned, they are candid. I have to believe that trust is at the heart of good communication, solid relationships and a true desire to learn and be better. We trust our nonprofits and they trust us.

In this place we call paradise, there are issues the majority of us don’t often hear about. And there are nonprofits that deal with issues we’d rather not even know exist here in our glorious valley. The Montrose-based CASA program handles only a handful of court-referred families every year in our County, but the issue of abuse and neglect is real. Two part-time CASA Advocates help children, who have been removed from their homes, access resources and they oversee visits between children and their non-custodial parents. As hard as it is to admit we have these tough issues in the valley, it’s a joy to report on successes. Here’s one such story – from CASA:

Right here in the Valley, AB and CD had their children taken from them because of meth use and neglect. When that happened, they made a decision to become better parents and wanted to do what was necessary to get their children back. They were open to suggestions, ready to attend the Nurturing Parenting Program and use other nonprofit resources, and willing to have CASA supervise visits with their children. The parents created a routine for themselves and their children and, during drop in visits, CASA noted that they’d created family rules that were posted in the hall. The nonprofits had worked their programs well, and the children returned to live with their parents. Five months later, the parents came to CASA to say, “Hi and thank you” and to give an update. AB is working full time, CD is getting dentures, they have stayed off drugs and the kids are doing well in school.

Those parents owned their mistakes and then trusted nonprofits to help. The nonprofits delivered. Indeed, it’s wonderful to report a happy ending to a tragic beginning.

Donors: Thank you for trusting nonprofits to use your gifts wisely and to make a difference in the lives of many.

Nonprofits: Thank you for trusting CFGV with your questions and nonprofit concerns and for being candid in your reports.

Community: Thank you for owning your words and actions and thank you for your trust in CFGV programs.