No matter how you say it, a simple welcome goes a long way. 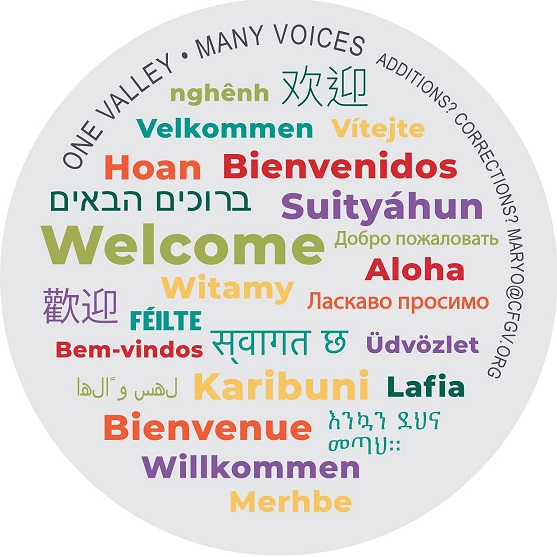 Did you know that in addition to English, there are at least 28 other languages spoken in homes around the Gunnison Valley? Just like 100 years ago, our neighbors include immigrants from many countries and many cultures.

Studies show that places with diverse populations are more resilient, and we invite you to acknowledge and celebrate our diversity.  When people feel truly welcome in their community, they are happier, healthier, and more involved.

The Community Foundation of the Gunnison Valley (CFGV) is raising money through a Kickstarter campaign for yard signs that say “welcome” in the 29 different languages known to be spoken in our community. These yard signs will look almost identical to the welcome stickers you may see at a variety of locations around the Valley.

Click here to read an article in the Gunnison Country Times on the first version of the Welcome project.

Here are just a few stories of our local immigrant neighbors:

Sephora’s father sought a better life for his children. Originally from Chad, Sephora moved to the Gunnison Valley when she was 14 years old. She’s grown to love this welcoming community and is currently attending Western. Sephora plans to pursue a career in nursing.

Magdaleno has called Gunnison home for almost 20 years. He’s from the town of Jesús María in western Mexico and speaks Spanish and Cora. Working as a manager in one of Mt. Crested Butte’s lodges, Magdaleno is an active member of the Cora community here in the Valley. You can find him at work, on the bus or around town with a welcoming smile on his face!

Xavi (pronounced Chevy) is from Catalonia in Spain. He spent the first 15 years of his life under the oppression of the Francoist Dictatorship and jumped at the chance to see the world after Franco’s death in 1975. Xavi stumbled into a ski resort job in Crested Butte in 1984 and never looked back. Xavi was welcomed “home” to the Gunnison Valley all those years ago and has developed a successful career as a nature photographer.

Allan and Francie Ivy are from South Africa. About ten years ago, the Ivys stumbled on the Gunnison Valley and fell in love with the landscape. Since then, they’ve enmeshed themselves in the local community and revived a beautiful brick building on Main Street with Open Your Eyes Gallery.

Hailing from Szekszárd, Hungary, Agnes arrived in Gunnison to attend and run competitively for Western in 2004. Four years later, she graduated with a degree in business and accounting and a deep love for this place. Agnes is currently the Office Manager at a local law firm. In her free time, you can find Agnes on the trails with her two pups.

Fluent in Japanese, Matthew grew up in Hawaii and was recruited to Western to wrestle. The local community’s welcoming atmosphere and small-town feel inspired him to make the Gunnison Valley home.

Wouter (pronounced Vowter) is from Amsterdam and found his way to the Gunnison Valley after earning his Master’s in Finance in Arizona. Twenty-three years ago, Wouter was welcomed home to this high mountain paradise. He jumped right into small-town living!

Megan fell in love with the welcoming Gunnison Valley community eight years ago. She came for the snowboarding and stayed because of the people. The beautiful mountain setting and friendly environment remind her of her home town of Lucerne, Switzerland.

Marketa is from the Czech Republic. She is an active skier who has called the Gunnison Valley home for 17 years. As a Legal Representative at Hispanic Affairs Project, Marketa does everything she can to make Gunnison a welcoming place to all.

“Our elected officials in Gunnison County are truly promoting inclusiveness and trying to support immigrants as part of one big family in the Valley.” Ricardo Perez